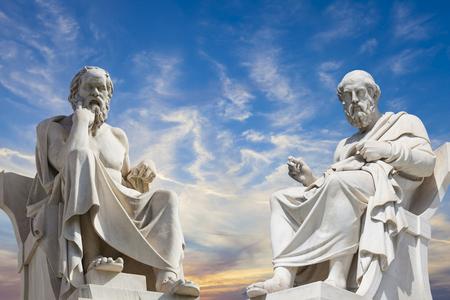 The word philosophy comes from the Greek words filein (to love) andsophia (wisdom).
Philosophy studies and defines the limits and possibilities of knowledge and existence of man, considered as single and as being related to others. Therefore there is a theoretical side and a practical one. The latter was a main subject especially in ancient Greece where the political aspect of the polis was very decisive. In ancient Greece the philosopher was a politician, an astronomer, a wise man tout court.

Amazement, astonishment and wonder brought about philosophy in Greece. Greek philosophy came about when man realized the world is beautiful, and then felt the need to describe and understand it. Through philosophy, man felt part of the world more deeply.
Etymology brought us to Greece, however, it really developed somewhere else. Even though it is difficult to assert where and when philosophy was born, around 1000 B.C. a way of thinking which is something between philosophy and religion rose in India. The sacred texts of Indian Veda are probably the most ancient philosophical texts (1300 A.C.)

While Greece and Rome were still in their prehistoric period, in the far East, some of the deepest philosophical-religious experiences of humanity, took place: Hinduism, Taoism and Buddhism, which are still alive today, as three eternal pillars of human philosophical and spiritual background.

Oriental philosophies conceive knowledge in terms of salvation and/or enlightenment. The veil of maya, the veil of illusion above the real world, has to be unveiled; man has to move on from samsara to nirvana, which is a very challenging shift of existence, i.e. from an illusionary world to a real one. Once this decisive goal has been achieved, man becomes a philosopher, a saint, illuminated. Gautama Buddha, in VI sec. B.C. in India, was the first person to be illuminated, the one who gave the example to follow, from which comes Buddhism itself.
At around the same time, in China, Lao Tzu created the doctrine of Tao, the foundation of everything that explains the becoming of things, symbolized in the two opposite principles ying and yang.

Conversely, in the VI sec. B.C. in Mileto which was the main city of Ionia and the most important economic and cultural site of the ancient western world at that time, a more laic philosophy was born. It was concerned to the world of senses and to what in the future will be called science. As a matter of fact, we can certainly assert that science comes from the Mileto school of philosophers, because these thinkers were the first who tried to explain the world basing upon nature and its laws. In their Weltanschauungeen there are no supernatural or transcendent principles but only natural ones, such as water for Thales, air for Anaximenes and fire for Heraclitus. Their main purpose was finding the eternal principle of everything, the so called arché. Most importantly, these principles were founded in nature, rather than in the noetic world of concepts.

Even though these first philosophies inherit many elements from myth (which is still a way of comprehension with a quite weak and even absent presence of reason), Greek thinking marks the first definite separation of philosophy from religion, the first position of autonomy by reason.
Only with the advent of Christianity,  philosophy begins to focus on religion, but still in a “scientific” way and with its logical tools: theology rises. All this period, the Middle Ages, is a justification of the Christian doctrine by philosophy, all medieval philosophers tried to demonstrate the existence of God with the help of reason, each one in his own way and with a personal demonstration - see the famous Anselm’s ontological argument.

With the coming of the modern era, science begins to progress and the more it progresses the more Christianity loses its supremacy. Its positions are progressively discredited by the new science: Galileo discovered the position and the movement of the earth around the sun causing quite a strong cultural revolution at that time, so strong that he was accused of being a heretic by the Church. To avoid death he had to reject his theories in the trial - even though shortly after it, his famous words: “eppur si muove!”, underlined his certanity about the truth he exposed, a truth then confirmed by future science.

Another thinker, who was close to his ideas, was burned alive after seven years of imprisonment: that was the tragic destiny of the great philosopher Giordano Bruno.
The philosopher Cesare Vanini was burned too and Girolamo Savonarola was tortured, stoned, hanged and finally burned as a result of his way of thinking.
This is the Renaissance: the revival of reason, autonomy of philosophy and science and the eternal struggle against religion that always repressed their work and their lives. After the Renaissance, philosophy became more and more rational. In fact in his Critique of pure reason, Kant asks: what the limits of knowledge are? Can we go beyond reason? And what about metaphysics?

All these questions and many others along with the crucial distinction between phenomenon and noumenon, mark a deep step on the history of philosophy and its development. After this apex of logic and extreme effort of human reason, idealism came: a revival of spiritual thought enriched with a strong background of modern empiricist philosophy. Kant’s noumenon would be studied in the deepest way by German idealists such as Fichte, Schelling and Hegel. Afterwords, existenzialism and nihilism “killed” all romantic and idealistic élans of philosophy, bringing it to its contemporary and quite tragic level. Postmodernism is the name that unites all those philosophies that describes this present spleen.

While French and German thought dominated the continental panorama of western modern and contemporary philosophy, in the Anglo-American world philosophers dedicated to other ways of thinking basically concerned on studying science in its intellectual aspect. Logic, nature, limits of science (epistemology) and limits of words (philosophy of language), in a word: the analytical philosophy.

It seems we have come pretty far since the spiritual oriental beginning! However, the unbelievable consequences brought about by quantum physics, shuffled philosophy’s cards too and some contemporary insights (legitimately) claim to bring together the ancient oriental wisdom and some quantum assumptions, I refer to the so called Tradition or Perennial Philosophy.

Spirituality and science merged again as in ancient times, thanks to philosophy: Heraclitus doctrine of contraries, the Chinese ying and yang or the Indian veil of maya are echoing in some implications of quantum mechanics.

The revolution brought about by quantum physics twisted philosophy as well, the latter is not able to comprehend this reality anymore – unless uses the ancient principles of Oriental wisdom.

Everything goes by, Heraclitus said, everything comes back again in an eternal recurrence, Nietzsche said …

An introduction to Philosophy