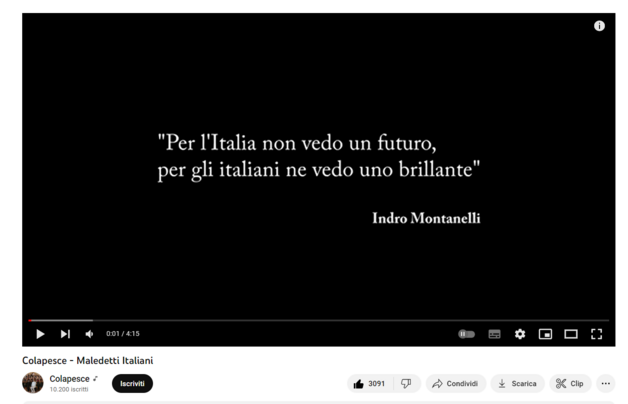 Maledetti italiani: when music hits the mark. Colapesce and his poetical analysis of current Italy.

​At times, art manages to make us see reality in its sprawling objectivity. From the perspective of art, reality appears irredeemably even more absurd than what it already is. Behind a language always lies its culture and society, music is often a valuable instrument of enquiry as it knows, poetically, how to reveal its concealed meanings. The Sicilian singer Colapesce, (Lorenzo Urciullo) with his song “Maledetti Italiani”(Damn Italians), depicts a perfect portrait of desperation in present Italy; a country that seem at the threshold of its cultural and social decline in which Colapesce’s generation can’t identify with and  who feel       estranged from. This song displays this generation pinned down to its surrender.

“For Italy I do not see a future, for the Italians I see a brilliant one”. The video begins with this sharp aphorism by the celebrated Italian journalist Indro Montanelli who perfectly frames the current situation of Italy. It is a condition impinged on a widespread feeling of immobility bolstering a sense of emptiness, which is well embodied by the protagonist Francesco, a new generation Italian who was born and raised in Catania (Sicily).

At the beginning of the video, we can see this boy writing down an infinite list of famous Italian people who will have to be eliminated somehow; the name of Colapesce is on the list as well and distinctively underlined.

Thus, armed with all sorts of weapons and tools, Francesco  rips, blends, cuts, destroys into pieces the best and the worst of Italian society. Why then? Time for a clean slate, probably dreaming about the dawn of a new beginning.

As Luciana Apicella says: “Maledetti italiani is a charge of indictment, an act of accusation without the possibility of redemption to narcotic and surrendered people, whose only moment of proud awakening is when they can enjoy the sales  at Zara”[1].

Considerably interesting, as stated above, Colapesce places himself among the damn Italians too, he’s also torn to pieces by Francesco.

Colapesce himself clarifies: “Italy has always used its past and the figures that have made our country immortal  (The Renaissance for example) to justify the decline in which we have drowned for decades. As if the cradle of the Renaissance, was a salvation for corruption, the mafia, and all the disadvantages that have always characterised Italy in the eyes of the world.

I do not feel better or worse than anyone, I belong to that generation that grew under the blows of Berlusconi, that generation which was born surrendered, and which has grown with the awareness of not having a future”[2].

There’s a great deal to be learned from his words, his message is overtly charged with unsettling truths, which can’t be done away with, however, needless to say, this message is still ignored by a great part of Italians, hypnotised by the berlusconian-renzian lullaby.

Destroy everything then, but why? In order to start everything up again from scratch? This could be the strong, desperate and disenchanted message which emerges by analysing some of his lines: “I’m totally unaware of what’s going on, the world crisis broke out, I was in the kitchen, eating an apple”. This verse perfectly outlines the total and chronic disinterestedness of the new generation, now yielded, pinned down to its surrender, entirely at the mercy of itself, as if waiting for an end, as sure as inevitable.

In the following verse, in a nutshell, Colapesce sums up perhaps the most serious problem of Italy in recent decades, that is, chronic corruption and he does so with its delicate, soft, detached style, pregnant with that feeling of surrender that pervades the whole song in itself:

“Congratulations to you, what a beautiful kid, teach him to be honest as the sly ones always end up in trouble”.

However,  the   singing   style   and   the   melody   soften   the ruthlessness of the words and brings back that disenchanted, disillusioned and elegant atmosphere, which is the song’s core.

Including     himself           among the            damned    Italians,           Colapesce stylishly aims to underline the hopeless surrender, which is global indeed. It’s a violent hurricane that takes us all away, it infects us all, as an epidemic: we Italians are all cursed, this is in the end the strongest message and the hardest to accept. He continues:

“We feel victims, we feel alone” - and then the absurdity, the kafkian reality in which we are all involved: “A strange man stands up: stop! Sales at Zara have begun”.

And then again about corruption and its supreme symbol, a windler: “This time you pay dear windler, you wanted to come to the party, the family you dodge does not recognise you”. Here, the sense of loneliness is even stronger: corruption is so chronic that neither the previous generation recognises it, it has come too far, nor our parents recognise us anymore, degradation is total and without return.

After the second chorus a key phrase comes, an unsettling and devastating sentence: “The mafia has become pop”. No need to comment on it whatsoever, just take note and despair as it is just the truth, uncanny as it is.

Then he carries on with the equally surrendering, poetic and terribly true verse: “And a foreign city will welcome you with a smile. I am not a true Italian”. In these last words a whole generation is sadly mirrored, a generation to which I myself, as an emigrant, belong, sharing the blue feeling.

At the end of the song, the last thought, still dripping with desperate surrender: “I’m always the last one and I’m not sorry about it… what’s the point of being on time, if in the end the one who won has lost anyway?”

For this reason, Francesco destroys everyone in the video, both cool characters and losers, masters such as Montanelli, Pirandello, D’Annunzio, Tenco and symbols of degradation such as Renzi, Brosio, Cutugno (interesting enough, Franco Battiato is not included in these “prestigious” lists).

It is true that so many Italians keep going abroad “where a foreign city welcomes them with a smile” because many of us, have by now realised that staying in Italy does not make any sense nowadays as there is – at least for now - no way to reconstruct (brain drain is indicative): from the ruins you can only run away. So: “Damn Italians, damn, damn me”.

A last note about the purely musical aspect. Maledetti italiani is a beautiful, elegant, refined, well-structured and well mixed piece, both the body and the chorus are structured on melodies that are catchy, special, soft but at the same time penetrating. The piece is invigorated by a rhythm of softness, an almost whispered song, mild, voluntarily unobtrusive, even slightly intimistic and here its originality and elegance: although an overtly protest song, Maledetti italiani is not screamed, it is a sophisticated protest, detached, almost elitist in breaking off both good and evil. A musical attitude that fully reflects the words, hence the effectiveness of the piece: music and lyrics are admirably mixed, they become, a single unit both refined and powerful, a deadly mix that is quite detached from any banal screamed protests.

In conclusion, through a spot on mix of both an elegant pop song and refined lyrics, Colapesce manages to depict our contemporary times in its sprawling objectivity  and absurdness, setting free that feeling that only us, “damn emigrated Italians”, from first hand experience, know well. Two or three generations cooped up in a strong and widespread awareness of surrender whose end, tragically, has yet to come.

I'm neither Muslim nor Hindu nor Christian nor Buddhist. I’m not for the hammer neither for the sickle and even less for the tricolour flame because I’m a musician.